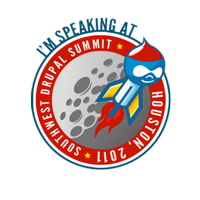 Southwest Drupal Summit 2011 will be held on January 27-28, 2011 in Houston. This weekday event will cater to the business side of Drupal development and will feature numerous featured speakers, including Dries via video from Australia!

On Thursday, January 27, 2011 at 10:55 AM I will be presenting CiviCRM for Non-Profits and Small Businesses. Join in and learn about what an integrated CRM system can do for your organization!

If you are following on Twitter, look up @SWDrupalSummit.